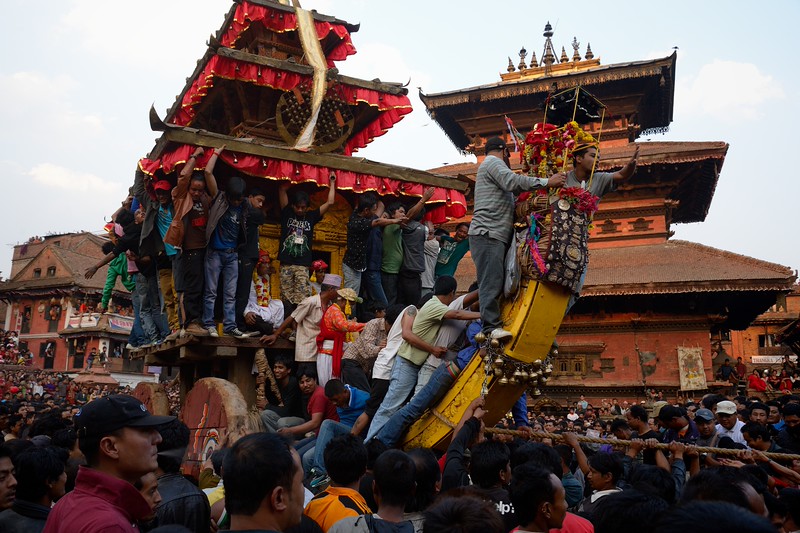 Once capital of the kingdom, today Bhaktapur is mostly visited for its typical newari architecture. But those who will spend some more time in this lovely city will discover that the origin of its name (Bhagdaon = "city of devotees") is well deserved. Devotion is part of everyday life with a multitude of small and simple acts, ready to explode during the many vibrating and colorful festivals of the nepali (and newari) calendar.

Bisket celebrates the beginning of the new year and it is a long, loud, colorful and sometimes crazy festival. It last nine days, including the last 4 days of the finishing year and the first 5 days of the new one. It offers a great variety of events and situations to discover the original newari culture.

The festival is believed to have started during the reign of king Jagajyoti Malla, which ruled Bhaktapur from 1613 to 1637, a golden age for Nepalese art, craft and architecture.

Bisket Jatra is the "festival after the death of the serpents". According to the legend, the king's only daughter was possessed by some kind of evil force: every time she got married, during the honeymoon night two huge snakes originated from her nostrils, killing her husband. This happened several times, until a young freer came from the forest armed  with tantric powers and a sword, married the princess and killed the snakes, bringing joy and relief to the denizens of the city. 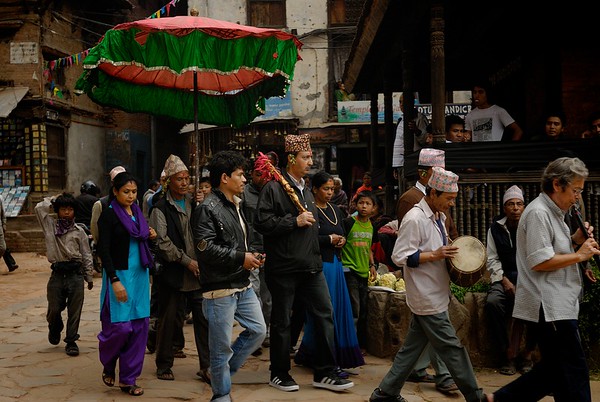 the mythical sword being carried by Bhaktapur's major

Click here to go to the Bisket Jatra image folder

...or read on, then click on images or on the chapter title to browse the corresponding gallery 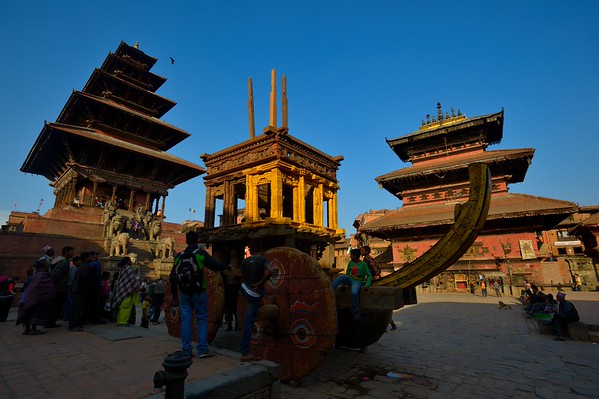 The preparation for the festival actually take far more days than the festival itself.
Two weeks are required to assemble, paint and decorate the huge chariot that is going to host Bhairab, the lord of death, who only leaves his temple during this festival.
Meanwhile the much smaller chariot for Bhadrakali (Bhairab's consort) is also assembled, and the painting portraying Bhairab on a small stone receives a refresh by a local artist.

Some say that the festival begins only when Bhairab takes place inside his chariots. Nevertheless, the starting day of Bisket is full of events, even if much smaller and less crowded.

From the early morning many goats are sacrificed inside Bhairabnath temple, while priest will chant holy hymns, burn incenses, wash  and prepare the god for his annual exit .

Outside, in Taumadhi tole, devotees will complete the decoration of the chariot, which will receive a kind of garland of bells around is yellow appendice representing a dragon head (called Beta Sin).
When the chariot is ready to receive its holy guests, the gilded copper statue of Beta Dyo is taken to the square, washed, worshiped and finally moved to its place on top of Beta Sin, as this god is supposed to be the chariot driver and protector. This god is believed to be so dangerous that during the rest of the year is locked upside-down in a secret room.
The following event sees children of Bhaktapur joining forces to move Bhadrakali's chariot from Taumadhi tole towards the lower part of town: a small anticipation of the main event of the day.
In the afternoon, on the platform in front of Bhairabnath temple, elders sing ancient holy hymns backed by a orchestra of traditional instruments consisting in thin long trumpets, cymbals and drums, while the steps of Nyatapola temple gets crowded little by little. 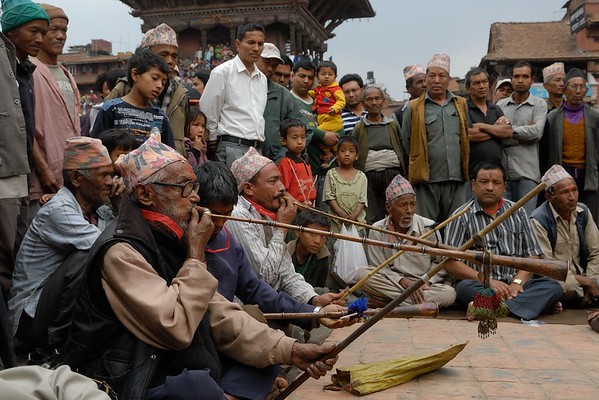 Finally, when Taumadhi tole is a carpet of people waiting, here comes Bhairab.... People yells, pray, throw every kind of offer, fathers raise their children above their heads while the god, carried by four priest dressed in white and protected by a group of strong policeman, exits the small door of its temple and crosses with difficulties the square, splitting the thick crowd and finally being raised to the chariot. A small amount of time passes while the god is fixed in his position inside his mobile temple. Tensions rises until, after the signal of a priest, the contest begins: ropes get suddenly stretched on the two sides, as devotees from the lower and upper part of town will try to carry the chariot to their side, showing their strength and gaining Bhairab's favor . It is a tough and dangerous contest: the chariot has no brakes nor steering gear, and it is not unusual to have somebody passing away under its wooden wheels. Most of the times, before darkness fall the chariot is gone on one side or the other, but the contest may last all night, and it may happen that after going far on one city side, it will come back to the central square in the middle of the night. 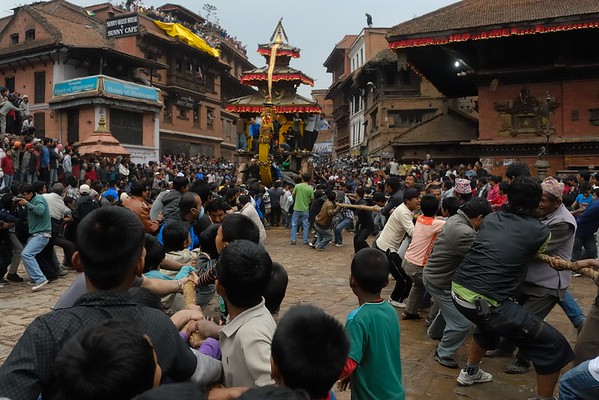 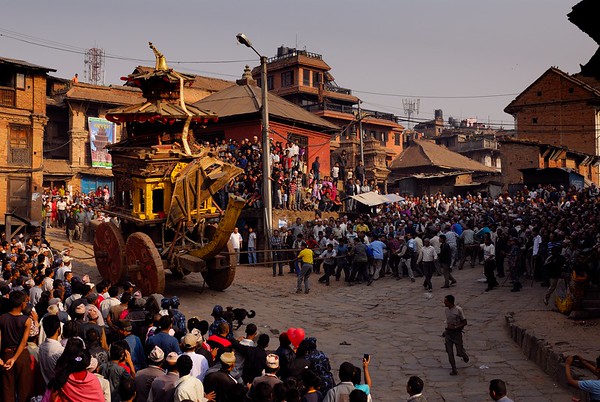 2nd day: reparations and taking the chariot in Gahiti tole

No official event is scheduled on the second day of the festival, probably because after the "tug of war" of the first day, sometimes Bhairab's chariot needs some kind of reparation, in order to be able to reach Gahiti tole, where it will stay until the end of the festival (with the exception of the first day of the year and the preceding evening) receiving offers by local devotees.

After the chariot is parked in Gahiti tole, Bhairab's effige is taken to a nearby shrine, where it will be surveilled and worshipped night and day. 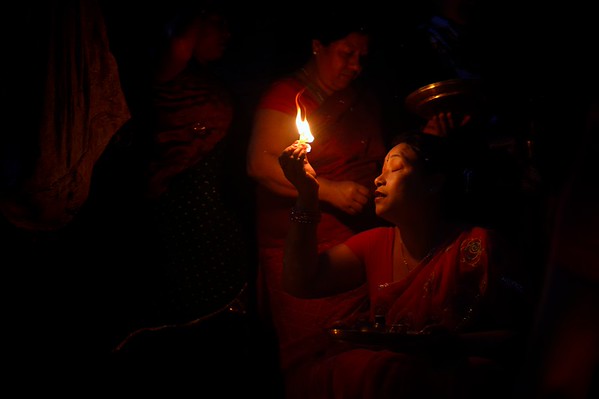 The last day of the newari calendar is marked by the raising of new year poles.

In the evening, after the two chariots are taken to Yoshin Khel (the "new year" square), the huge New Year pole is erected (Yoshin Deo thanegu) with two long red banners symbolizing the dead snakes of the legend. They celebrate the victory over evil and the wedding between male and female, Bhairab and Badrakhali, sky and earth.

The fifth day of Bisket is the first day of the newari calendar. Every family of Bhaktapur visits the huge Yoshin square, where two red banners hanging from a long pole symbolize the two snakes of the legend. Again every kind of offer will be given nearby the chariot: it may be rice, flowers, fruit , alcoholics, and sometimes a chicken, which will feed with blood the hungry lord of death.

After sunset the big pole is grounded (Yoshin Deo kothegu = grounding yoshin pole). Then both Bhairab and Badrakhali can go back to their respective chariot. The two temples on wheels will be carried back to Gahiti tole for Kha Lwakegu (collision): the two chariot will clash three times, symbolizing a sexual conjunction, their "kiss goodbye" until the next festival. 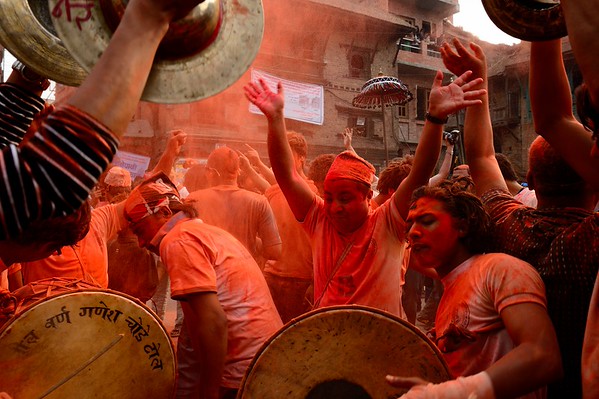 In the afternoon, back in Bhaktapur, the symbolic get together of goddesses MahaLaxmi and Mahakali take place: the two sister goddesses are carried around the city receiving offers and distributing blessings.

In Dattatraya square several gods are taken around on their litter, while a traditional orchestra plays ancient hymns and an ancient large thankga is displayed on the square. 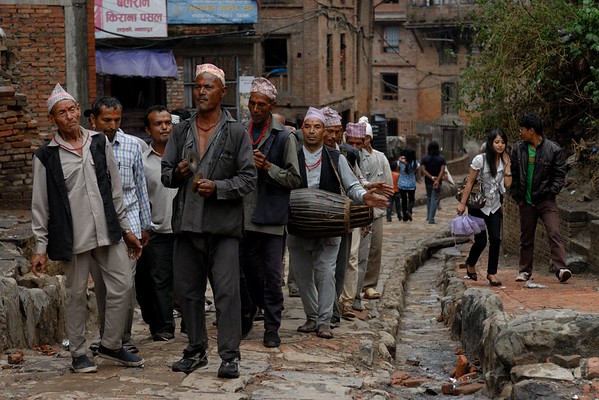 All around Bhaktapur devotees pay homage at temples with offers. Most of the devotees wear their best traditional clothes, and cultural musical orchestra ramble thru the street stopping by temples to sing ancient holy hymns and entertaining people.

In the evening the broken parts of the chariot are used to light a fire, watched over with hymns all night long.

Early in the morning devotees collect ashes from the fire lighted the previous evening: these ashes are believed to protect the house from evil spirits. Later, also the pole in Talako tole is grounded and taken back to its place (Laha maru Yoshin kothegu).

Deo Thaha Biyakegu: the final chapter of Bisket Jatra takes place at the end of the day. Bhairab and Bhadrakali are taken to their chariots for the final trip: taking the chariots back to Taumadhi tole. There the gods will leave their temporary temple on wheels and go back to their official shrine, hidden and inaccessible. The chariots will remain in Tamuadhi, where they will be dismantled in the following days. Now, not hosting any holy objects, it is no longer worshipped, but it is still a place for children's games and a massive symbol of this great festival. 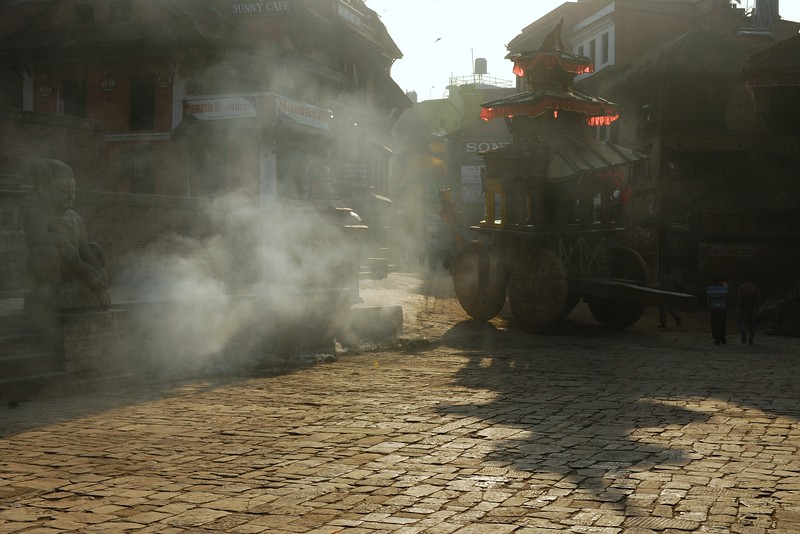 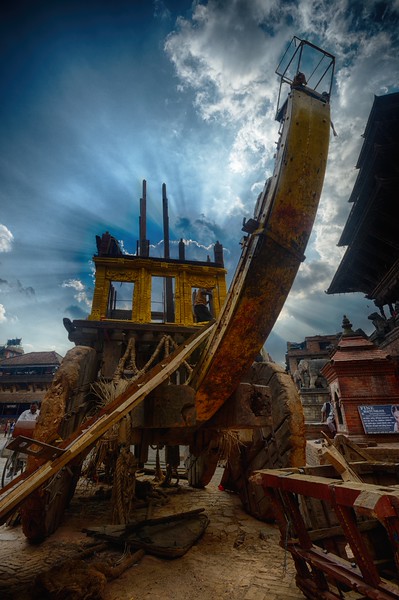