Being the largest human gathering in the world, the Maha Kumbh Mela is an incredible meeting of faces, colors, smiles, flavors, faiths, sounds, emotions, mystic energies... It’s like the whole world gathered in a single place. You may be a pious hindu pilgrim from a remote indian countryside or a western tourist from a busy metropolis, anyhow this is the experience of a lifetime, something that will stay with you forever, or maybe even change your life.

Maha Kumbh Mela is considered to be the largest peaceful gathering in the world where around 100 milions people were expected to take holy dip at the confluence of Gange and Yamuna rivers during the two months long festival in Allahabad in 2013.

10 February 2013 was the biggest bathing day at the Maha Kumbh Mela and probably the largest human gathering on a single day. Over 30 milions devotees and ascetics took holy dip on the occasion of Mauni Amavasya celebration.

The observance of Kumbh Mela is based upon the following story : thousands of years ago, perhaps in the Vedic period, gods and demons made a temporary agreement to work together in obtaining amrita (the nectar of immortality) from the Milky Ocean, and to share this equally. However, when the Kumbh (pot) containing the amrita appeared, the demons ran away with the pot and were chased by the gods. For twelve days and twelve nights (equivalent to twelve human years) the gods and demons fought in the sky for the possession of this pot of amrita. It is said that during the battle, drops of amrita fell on to four places : Prayag, Haridwar, Ujjain and Nasik. Thus, Kumbh Mela is observed at these four locations where the nectar fell.

The Sangam (confluence, from the Sanskrit "samagama") is the confluence between Ganges, Yamuna and Sarasvati rivers (the latter being mythical, underground, invisibe). Bathing in this place is though to clease all sins. It’s the goal of every pilgrim and, for the nearly two months of Kumha Mela, the center of the world.

Here one can bath in the holy waters at the rivers confluence or in the confluence of souls of this temporary universe, from holy men praying to the sun or doing a puja,  to shadus blessing long lines of pilgrims, to every act of the daily life of milions of pilgrims.

Sarees in the wind

Every single pilgrim reaching the holy place will bath at the confluence of the rivers. While the nudity of people bathing in a holy place is pure and innocent, here you will not find any (both for respect of the subjects and to avoid to attract viewers with not pure purposes).

Instead, you can find images taken just few minutes after the bath, when women dry their sarees in the wind: a poetry of colors fluctuating in the wind, a joy for the eyes, for the soul... and for my lens! 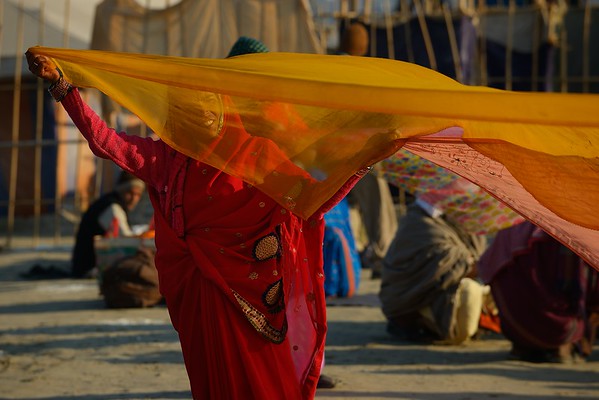 Kumbh Mela offers the opportunity to see faces of milions of pilgrims coming from every corner of the indian subcontinent: lay people, shadus and the famous naga-shadus, those men which reject all possessions, cloth included: they cover their naked body with just a thin layer of ash. Their ghost-like images surely are fascinating, but the infinite variety of faces belonging to every possible ethnic group of the indian subcontinent is another good reason to witness this amazing event.

The most important day of Kumbh Mela is Mauni Amavasya (in 2013 it felt on february 10th).

Hours before sunrise milions of pilgrims gather to bath at the sangam along with a long procession of shadus, swamis and every holi man of hindu religion from every corner of the planet.

The huge crowd can be dangerous, and sure is intimidating, but nobody is driven by bad feelings: it is the once-in-a-lifetime pilgrimage for every hindu devotee, and joy pervades every corner. Everybody is smiling, everybody is willing to do good to God and to other humans around him... milions and milions of smiling faces !

Such an experience even for non-hindus, let lone photographers!

The western idea of India is sun and heat, and for a good part it is true, but sometimes it happens to witness something absolutely magical: a dreamy and misty morning, where mysteriuos forms appear and disappear from a thick white fog.

Then the sun comes up, dissolving the fog and putting an end to the dream: it's time to leave...